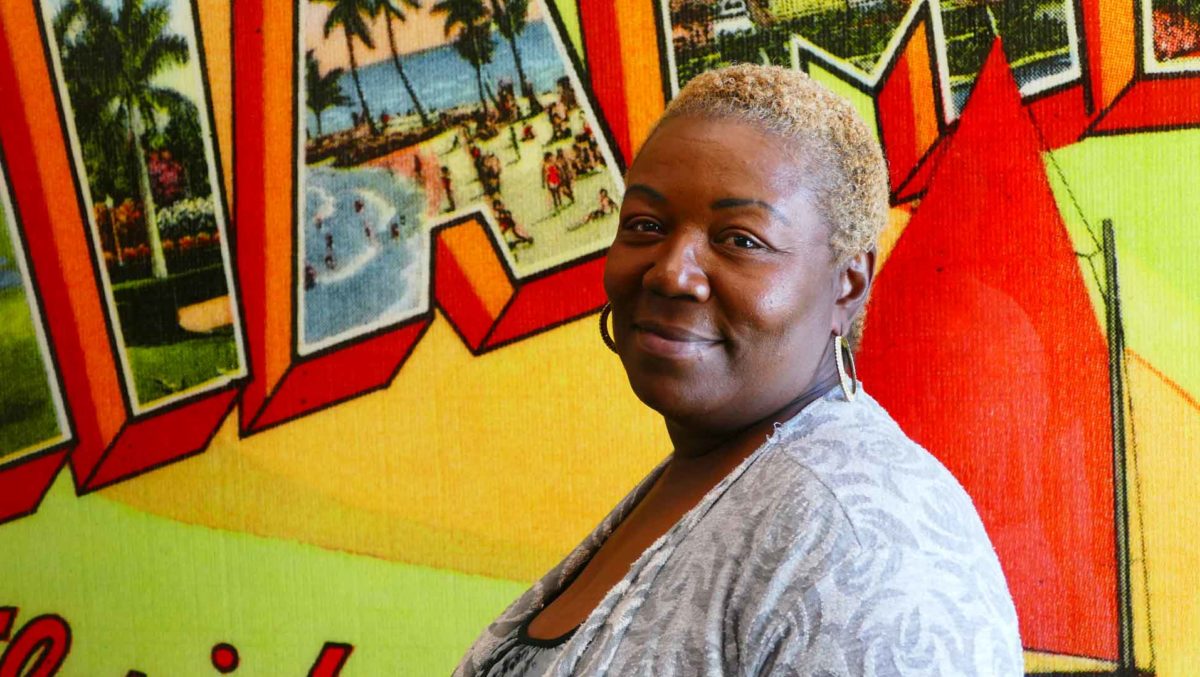 Velicia Bryant’s words are so unsettling as to seem unreal. But that’s the vile reality of human trafficking. Velicia’s story is one of the many variations of this horrific – and epidemic – crime. It’s happening all around us. Not just across the world and our country, but right here in our community too. In the U.S., Florida has the third highest incidence of human trafficking behind California and Texas. Even so, we’re hardly aware of it.

Part of the issue is, very often, it’s almost impossible to see.

In fact, if you saw Velicia at a PTA meeting or accidentally bumped carts with her in the grocery store, you wouldn’t suspect, not in a million years, that this 54-year-old grandmother with an easy smile is a human trafficking victim.

But she is – or at least, until six months ago, she was.

Velicia spends most of her time now looking forward, but sometimes she can’t help looking back.

Velicia doesn’t blame her mother. She was a teenager, just 16 or 17, and poor. Maybe, Velicia reasons, her mother thought that her aunt and uncle who “bought” Velicia, would give her a better life.

The truth was anything but. “My adopted father began molesting me when I was five,” Velicia says. “I remember it all very clearly. I can even recall the color of my panties when it first happened. I remember him saying, ‘This is what daddies do to little girls who love them.’”

But it wasn’t just her adopted father. For 11 years, Velicia was also regularly molested and raped by her uncles and cousins – eight boys or men in all.

The family lived in an old house and mobile trailers on a piece of property along the eastern shore in Maryland. In fact, the family “business” was a church. Velicia’s adopted mother was the pastor and her adopted father a deacon. Every Sunday, dozens of church members would show up for services, unaware of what was happening to the little girl who lived there.

For Velicia, life was a nightmare she never woke from. When she told her adopted mother, “they’re hurting me,” she was scolded and called a liar. Her adopted mother even accused the child of “wanting her husband.”

“She would beat me fiercely with an extension cord or whatever she could find,’ Velicia says, fighting back tears at the memory. “The beatings were as bad as the rapes.” So bad that Velicia’s adopted father would threaten: “If you don’t take care of me, I’ll tell your mother.”

“I was alone. I had no one to help me, no friends to talk to,” she says. “So when I got raped, I would just run into the woods. I had a make believe friend — a tree — that I would hug. One time I remember feeling that the tree was hugging me back. Its’ the only peace and solitude I could ever find….”

Velicia wonders if she had told her dark secret to a teacher at school, would they have helped? “When I share my story now, some people don’t understand ‘Why didn’t you tell someone?,’ they’ll ask me.

“But I didn’t trust anyone or believe that anyone cared. How could I, when my own birth mother had sold me?,” she wonders aloud. “There was nobody ever there for me. Nobody but a tree – that was all I had.”

So Velicia never felt like anything more than a piece of property. “I paid $500 for you,” her adopted mother would scream. “You clean up this house or you do whatever I tell you…. I heard that all the time,” Velicia recalls.

When she was 16, Velicia finally said “no more.” She ran away to Philadelphia. With little money and nowhere to go, she fell into life on the streets, selling her body to survive.

Shortly after arriving, a man, after paying for sex with her, told Velicia she was too young to be on the streets and bought her a bus ticket back home.

But she knew she could not survive for long in the same situation. So, almost immediately, she accepted a marriage proposal. She was only 17. Her husband was “a good man,” she says – a drummer in the church band who wasn’t aware of the molestation and raping that Velicia had endured all those years.

“I don’t know if I was in love with him,” Velicia says. “I didn’t even know what love was… But he rescued me, got me off that property and through many years gave me five beautiful children.”

But though she’d escaped physically, Velicia couldn’t cast off the shame that had been inflicted on her, day in and day out, since the day she’d been born.

“I could never feel like I was ok. I would just run, run, run. I never felt stable. I was a hopeless case – I never believed anyone could love me.”

And so, she sought escape in alcohol and drugs. Still, her husband didn’t give up on her, she says. “But without my cooperation, he couldn’t do anything more than say, “I’m praying for you” and “you always have a place to come back.”

But Velicia kept running, eventually to Miami in the 1990s, trying to escape her past and herself. “I was looking for something, I don’t know what it was… I felt like I was damaged goods.

And so, last year, after decades of this destructive cycle, deep in despair, drowning in self-loathing, and not believing there was a way out, Velicia took a bottle of pills.

But she was found and rushed to Jackson Memorial in time to pump her stomach. The doctor who saved her life told her he didn’t’ want to release her to the streets. “I see something in you,” he told her. “You don’t have to go back out there.”

That’s how Velicia came to be part of Project Phoenix, a special program at Camillus House to provide healing, housing and new hope to victims of human trafficking. Two years after its launch, Project Phoenix is helping victims like Velicia develop self-esteem and live independent lives in a safe and secure environment.

“When I arrived, one of the residential assistants, Alina, came up to me. When she reached out and hugged me, something came over me. I felt safe and I just broke down and cried. I knew everything was going to be ok.”

Today, only months later, Velicia has dreams and hopes for the future.

Through Camillus House, she is working for the Miami DDA (Downtown Development Authority), painting over graffiti in the city. She’s attending school to earn her GED. She’s also receiving therapy, and life skills training and vocational development as part of the Phoenix Program, which she says, “literally saved my life when I didn’t want to live.”

Most exciting of all though is Velicia’s “Shoes of Mercy” initiative. She encourages women victimized by human trafficking to tell their stories with white canvas shoes. The women use magic markers to write and draw on the shoes in all colors, the way you’d sign a cast. Their markings are a record both of where they’ve been and where they are going. 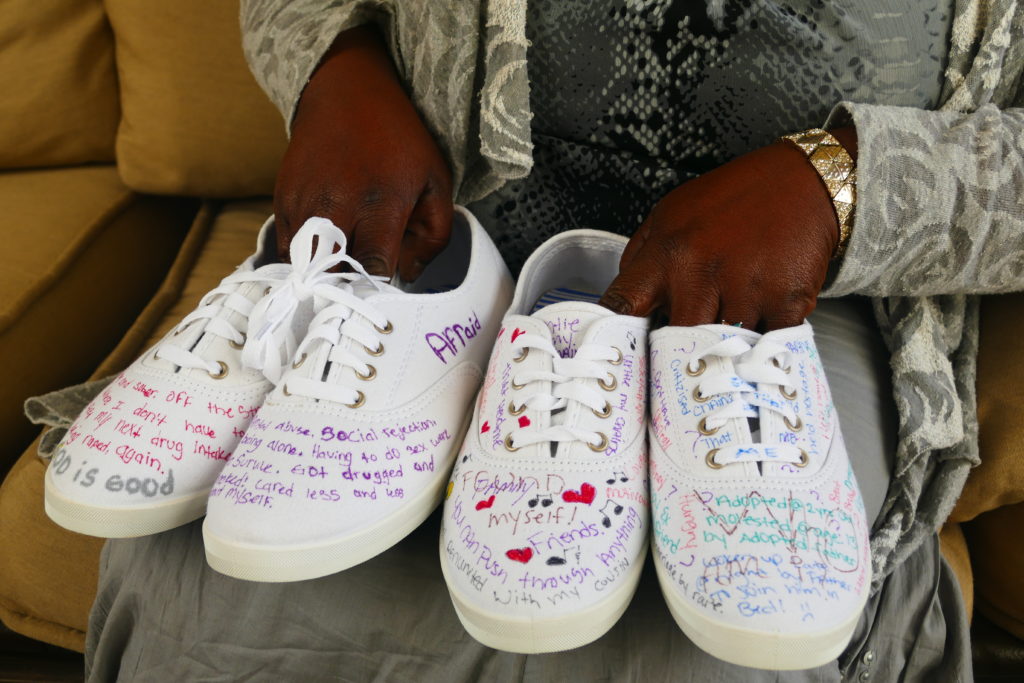 On the left foot, the women write the bad things that have happened to them. Those are their “victim” stories. They remember the pain and suffering that human trafficking has brought them.

On the right foot they mark the survivor’s part of their story. The new hope, the healing and redemption that happen at Camillus House’s Phoenix Project, where, Velicia says, “we get on the right foot.”

Velicia cradles the marked-up shoes of women now healing at Camillus House in her lap. She talks about organizing a large walk-a-thon with everyone wearing the now colorful canvas shoes. “Our stories are on them,” she says. “I want everyone to see – especially the girls and women who’ve suffered what I’ve suffered, that they can be survivors – just like me.

“I have a purpose and a reason. I know I’ve got to help that next woman or child. There are still five-year-olds out there being hurt – just like I was. I want to stop that. I want to be part of their solution. I want them to know there is a way out.”