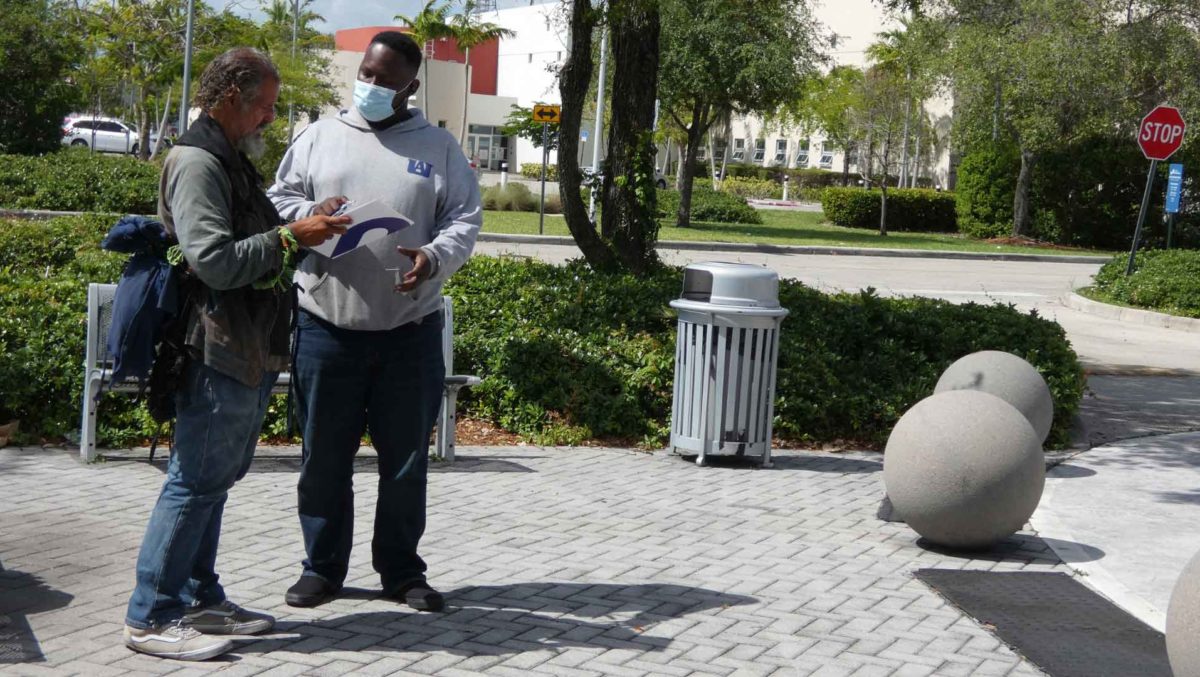 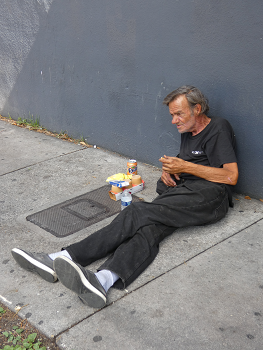 By 7 a.m. Monday through Friday the four-person outreach team of Camillus House’s Lazarus Project piles into a City of Miami van. Lazaro Trueba, assistant program administrator for the Office of Homeless Programs with the City, gets behind the wheel and begins the morning’s four-plus hour trek to visit the homeless.

Trueba, a 26-year veteran with the program and the person the program’s namesake, is joined by Lazarus Project Case Managers Khambrel McCoy and Claudia Drago and Certified Nurse Assistant Nadege St. Julien, on the trips, each bringing their expertise in case management services, mental health and healthcare to the individuals they visit daily. The specialized team primarily assists homeless persons who have mental illness and are reluctant to engage in or accept services, including shelter, because of their impaired ability.

On a recent trip the morning went like this…

Climb into the van at the Camillus House team offices located at 400 NW 3 Ct. and head toward a grassy area near the Hotel Inter-Continental Miami in Downtown to check in on Robert. McCoy and Drago have a conversation with him and St. Julien takes a look at his injured foot. Some medication is administered as well as snacks and it’s on to Bayfront Park.

There, the team looks for Gabriel who they don’t find. “Gabriel moves around, we sometimes see him in Wynwood but have also spotted him as far as 826,” said Trueba.

Next it’s on to Deborah and Marcus, a couple who have been on the streets for 20 years and Trueba knows well. The team visits them in front of the historic post office in Downtown Miami diagonal to Gesu Church. St. Julien pushes wheelchair-bound Deborah to a nearby store while the rest of the team gathers information on their current situation.

It’s a short trek to the Government Center to check in on Chris, who they have been visiting for two months. He has Type 2 Diabetes and has trouble trusting doctors but this morning he’s happy to speak to the team and discuss his situation.

The rest of the morning is just as busy with a visit to Donald in Allapattah who is refusing medication and is going blind. The team is hoping that during his next eye appointment they can get him on medication. “We are also hoping after this appointment we can get him into a shelter because he is losing his sight,” the team said.

Ronda is just a few blocks away from Donald. Sitting in a shaded spot in front of a convenience store Khambrel and Nadege dispense medication, provide food stamps and barter with her to come into Camillus House for a shower.

Over on NW 7 Ave. and 60 St. they look for Annie because they spot her belongings but not her and just 23 blocks north on 83 St. in front of the public library is Rudy, a client referred to them by the team with the Library Pilot Program.

Then it’s on to the final visit of the day in North Miami at Mia Casa on NE 119 St. and West Dixie Hwy. a space rented by the Homeless Trust. Here, they visit Carlos who is battling Alzheimer’s and is currently living on the protein drink Ensure. The team brings him medication and makes sure he has enough books. Carlos is an avid reader although he’s non-verbal.

Climbing into the van one last time, the team heads back to the offices after making a second stop at the Jackson Memorial Hospital Pharmacy to attempt to pick up medications. Twice they’ve tried and the second time the line is longer than earlier in the day. “We will try again tomorrow,” says Nadege.

And tomorrow, the Lazarus Project team will be back out at 7 a.m., possibly visiting additional clients, since they receive regular referrals from the Homeless Trust, City of Miami Police and area hospitals.

The project’s mission is to provide outreach to as many homeless people around the city as possible and give them a sense of hope that they are not forgotten. The end goal, to give them shelter as the first step to a permanent home and employment.