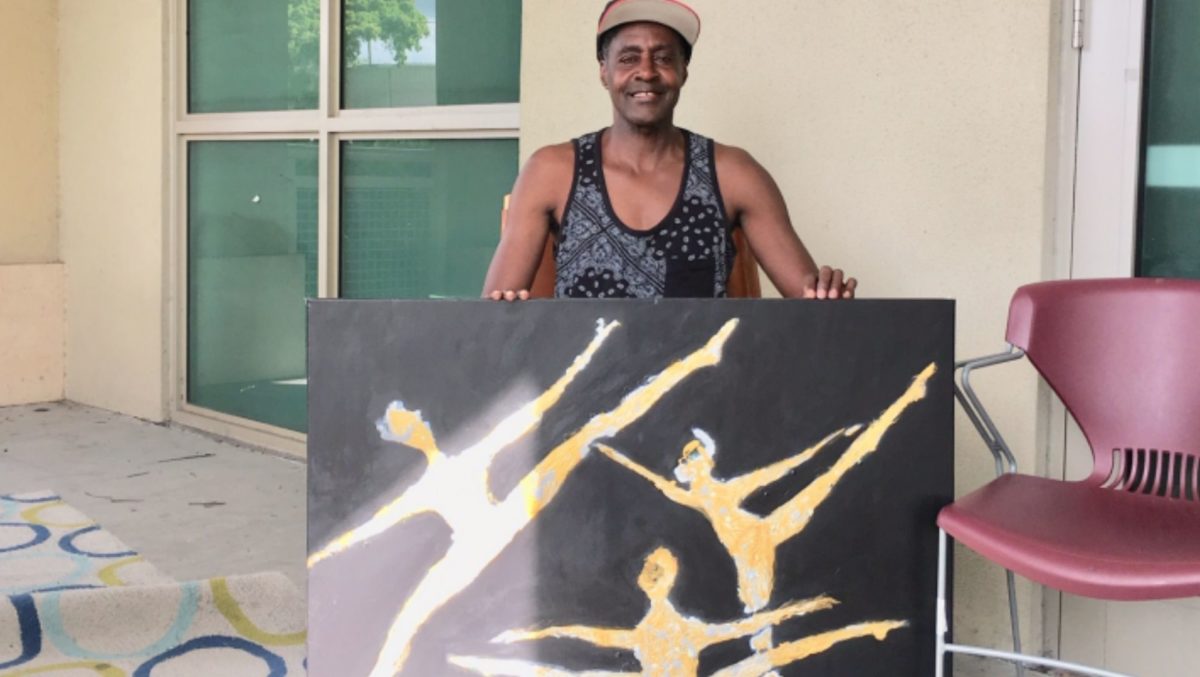 Three things about Mr. Glenn tell me he’s an artist before he gets into his bona fides. Not unlike many of the luminaries in the book Daily Rituals: How Artists Work, Mr. Glenn methodically awakens at the same early morning hour every day. He feels the fresh air on his balcony. And makes his way down from his home at the Camillus House campus to the Camillus art room.

“Yes, I live right above [the art room] at Cedars Court which is very nice,” Mr. Glenn says as smoothly as I imagine his paintbrush strokes after seeing his works among others in the room where jazz-inspired film scores join at any given moment to fill the air as fully as your ear’s newfound desire.

Camillus opened Cedars Court in August 2011. Located at the main Camillus campus downtown, Cedars Court provides permanent housing for persons who were chronically homeless. Tenants with disabilities like Mr. Glenn (he suffered a stroke precipitated by drug addiction) rent here for under $200 per month. There are computer and exercise rooms and clients remain drug free as a requirement.

Mr. Glenn began his journey through the Camillus Day Center Services (DCS). DCS gives people sleeping on the streets access to basic-needs offerings such as meals, showers, clothing and mail services as participants work towards moving off the streets and into housing. “I’m grateful that I got in when I did. I’ve been helped a lot and it also helps me a lot to be here, especially this program because I can release, you know…”. The way he slowly sounds out “release,” as if explaining what the word means by mere pronunciation, holds such magnificence in its Bob Ross-like momentum that it also inspires a curiosity in the word’s etymology—perhaps it’s pure onomatopoeia? And yes, the second of three things that reveal his artistry is how he teaches this word without trying.

“I’ve always been involved with performing arts and painting and drawing and performing visual arts and stage life and that sort of thing from Miami to New York and back and forth,” he continues.

Barry mentions the educational and employment programs offered through Camillus House in culinary arts; the showers, clothes, food, and housing. And he goes back to how these help others. “People young, old, in wheelchairs, people who are on top of the hills—so they think. You can’t beat it, you really can’t beat being here. I’m blessed that they do have that here.”

Barry proudly proclaims in his soft and steady cadence a list of television shows and feature films in which he acted as an extra and a stand-in, such as The Money Pit with Tom Hanks in the 1980s.

We head back in to the art room from the art room porch overlooking the sunny street where we sat during our interview. But not before a fellow painter and patron of the art center recognizes Mr. Glenn and with glee apropos of younger years, yells— “Barry!” I’m taking Mr. Glenn’s photograph and he stays serious, sensing some import in the interview. “Barry!” the charismatic fellow tries again, perhaps sensing some celebrity scent he finds irresistible. That 80’s energy back on the block. Mr. Glenn reluctantly cracks a great and grateful smile.

He shows me his friend’s paintings in the room. And then, mentioning the upcoming November 21st art show in which his works, along with other Camillus House clients, will be featured in Coral Gables—his own canvass of Bob Marley. Camillus strives to tell the stories, through their art, of people ending their homelessness. There’s another work of Barry’s with three people in earth tones. “Everybody’s holding each other’s backs, like saying, ‘I got your back’ and it’s no particular group of people, that’s why they’re that color.”

I ask him if there’s anything else he wants to add before we close. “It goes a long way to start from somewhere. You create, you learn, and you develop yourself from there,” he says, referencing artists. His words here also encapsulate the beginning of his journey out of homelessness—from sliding away on the streets to the sustenance of our Day Center where initial basic-needs services revived him so I could share his story with you here. Because it is through the generosity of community partners like you that Camillus can continue to offer these services. And light the way.