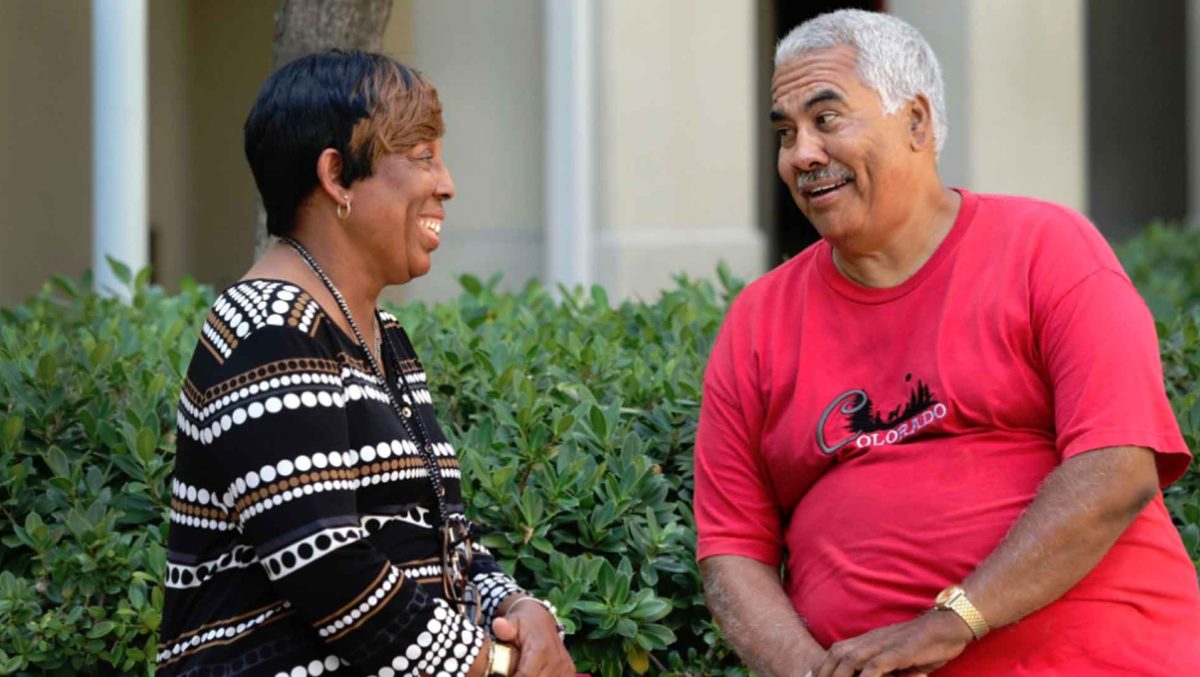 It’s often said that God does not give us anything we can’t handle. And that is how Keith Castrillo dealt with the life changing experience that almost left him, and his family, on the street.

In January of 2016, Keith spent two weeks in the hospital for diabetes-related surgery. When he got home to the apartment he shared with his daughter and her two young sons, he was told that there was a court-ordered eviction notice against them. “We had 7 days to find another place to live,” Keith said.

Then the other shoe dropped. His employer had laid him off for missing work while in the hospital.

With no job and facing eviction, Keith knew he needed help. And by the grace of God, he found it in an unlikely place. The judge who had signed the eviction notice “gave me a list and said these are the places that will help you,” Keith recounted. Camillus House was on the list.

The next day, Keith met Bernice Jones, his case worker at Camillus, the woman he calls an angel. “I wish there were more of them,” he said. The only thing he knew about Camillus before his experience was that they provided food for the homeless. He was not aware of the scope and reach of the work Camillus does to help the poor and homeless in Miami Dade.

“When I came to Camillus, I wasn’t sure about anything,” Keith said. “I didn’t expect what I got from Camillus.”

Jones guided him through the process and he made sure to keep up his end of the bargain, providing her with the necessary paperwork and documentation. “Whatever she needed, I was right there to get it.”

Through the Camillus Homeless Prevention Program (HPP), Keith received 2 months of rent to help him over the hump. Jones worked with the landlord so Keith and his family could stay in their apartment. “That’s a feeling I don’t know how to explain,” he said. “I just said, wow, thank God! I try my best to not let it happen again.”

The HPP is the only program of its type in the county, according to Jones, currently the program supervisor. Funding comes through the Homeless Trust and there is only one goal – to keep people from becoming homeless. It is a much less traumatic process for families to be helped with a month or two of rent than the longer process of getting them off the street and into housing, which can sometimes take months.

In order to qualify for the program, clients must have a court-ordered eviction or domestic violence occurrence within the past 90 days as well as proof of income. “Once in the program,” explained Jones, “Camillus will either provide relocation assistance or help clients stay where they are currently living. We help take care of the basics, light, water and rent…pay light bills for them, give them gas cards if they have a car, we give them food vouchers.”

With eviction cases like Keith’s, Camillus contacts the landlord to inform them that Camillus is working with the client so they don’t move forward with the eviction. And, Jones noted, most of the landlords are understanding.

The program is short term, offering assistance for two months. However, if a second occurrence for the same client comes up after a year, they can receive another two months of help, but it must be for a different hardship.

The courts, landlords and many community agencies are coming to realize that prevention is the answer and they are referring people to Camillus House. According to Jones, Camillus “has a lot of walk-ins. It’s a good thing that we’re out there, that the community knows we are here to assist.”

“I’m so glad for the help they gave me, I will never forget them,” Keith said. “I don’t forget my friends. They were good to me. I wish we had more people like them. They don’t stand behind you, they stand beside you when you need them.”

Through a partnership with Norwegian Cruise Line Holdings, the Homeless Prevention Program (as well as other programs at Camillus House) receives donations of school supplies, Thanksgiving dinners and toys for Christmas. Keith has not forgotten everything he has received at Camillus House and gives back every chance he gets, bringing his grandsons with him to help when these items are given out to other families like his.

“Norwegian Cruise Line Holdings values its dedication to family and community, and I am proud to be part of a company that recognizes the importance of how its contributions impact the lives of people like Keith. His story is the reason for our ongoing commitment to Camillus House” says Nelson Fraga, Employee Engagement and Community Relations Senior Manager at Norwegian Cruise Line Holdings.