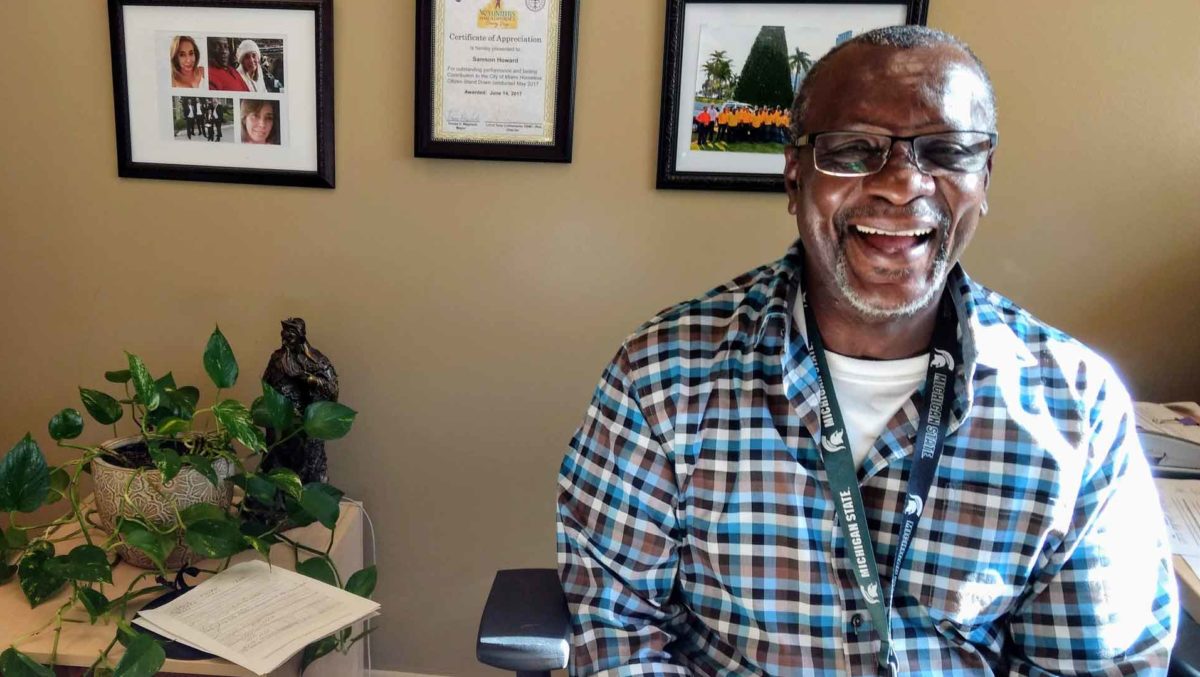 Upon meeting Samson Howard, one quickly sees his warm smile and an indelible sense of gratitude in his eyes. Samson, who has been working for Camillus House for more than ten years, was recently promoted to Emergency Housing Manager.

His new office is adorned with his Michigan State Michigan degree, football memorabilia, and countless pictures of loved ones. Judging by the neatness and upkeep of his office, it’s hard to believe that Samson first arrived at Camillus House not as an employee, but as a client.

Samson, the youngest of seven children, grew up in the Liberty City neighborhood of Miami. From an early age, church was a part of his daily life. Samson’s mother was a preacher at a nearby church.

“We didn’t have much, but she would give you the shirt off her back; she was just that type of person,” Samson explains. Although his father was not consistently around, Samson’s mother managed to provide for her seven children, as well as help various members of her church despite their meager means.

After high school and with his mother by his side, Samson was awarded a full-ride scholarship to Michigan State University. Although Samson may have had high hopes of playing professional football, it was his mother who repeatedly emphasized that the opportunity of education far outweighed a possible career in football. Heeding her advice, he applied himself into his college courses, even making the dean’s list at one point and eventually graduating with a Bachelor of Arts in community development.

After a few unsuccessful tryouts for several professional football teams, Samson returned to Michigan and started working and climbing up the professional ladder for more than a decade. “I believe that through hard work you can move up in any company,” he says assuredly.

But things began to change in 1986 when his mother and number one fan was diagnosed with Ovarian cancer. She would eventually die from the disease, which would profoundly impact Samson’s future.

“When she left, I had nothing to live for,” he explained.

After his mother’s passing, Samson decided to remain in Miami and began working at a warehouse and within six months he was promoted to supervisor. Unfortunately, a new job could not mask the profound loss he felt with his mother’s absence.

Unable to properly cope, Samson sought comfort and refuge with his old high school friends. It was through these so-called “friends” that Samson tried and eventually become addicted to crack cocaine. Not long after, the street-life engulfed Samson and crack became his “number one priority.” When asked why he chose the streets, he couldn’t help but answer, “I missed my mom.”

Within months, Samson had progressed into a full-blown addict. His job was no longer a priority and was beginning to get in the way of his addiction. Eventually, relationships with family members began to deteriorate, and soon, everyone in his family became aware of his addiction. His sister, who had once so lovingly taken him in, by then had prohibited Samson from entering her home.

“I was stealing things out of my sister’s house to pay for crack,” he remembers.

Samson spent the next few years in and out of treatment facilities. At his rock bottom, Samson was dumpster diving for food and trying to find anyone who would help him and his drug problem. After trying to seek shelter to no avail, Samson made one last phone call that would save his life.

“If you can get a cab to come here, we will provide you shelter, we will pay for the cab when it gets here,” said the Camillus House staff member over the phone to Samson. Now, all Samson needed was a cab ride to Camillus House.

“Welcome to Camillus House!” said the staff member after paying Samson’s cab fare when he finally arrived. Samson believes that from the moment he entered Camillus House his life has been blessed.

He enrolled in the Institute of Success and Personal Achievement (ISPA), a licensed addiction treatment program at Camillus. And, unlike the previous programs he attended, Samson decided a new approach was best. “I changed with Camillus House. I changed my mindset,” he explained.

“Wanting to change, I started listening to the staff and their ideas,” Samson says of journey to recovery. He not only credits the staff for his success, but also God for placing people in his path to learn how to be a better person.

By nature, a hard worker, Samson wanted to give back and help people at Camillus. Committed to his sobriety more than ever, Samson began volunteering at the place where he was given a second chance at life. Samson admits, “I was always around; I wanted to make the place look good because I lived there.” Samson helped by painting, planting trees, and cleaning showers at Camillus House.

“Camillus helped me rediscover all the morals and values my mom had taught me as a kid,” Samson recalls. “It takes time to get better, the more time you work on yourself, the better you’ll be.”

Today, Samson is full of gratitude toward the very people and place that so humbly took him in when he had nothing. He points to a picture on his wall of him and a group of formerly men and women in yellow polo shirts. They’re part of a work program at Camillus House in partnership with The Downtown Development Authority (DDA), which offers a work training that provides homeless individuals with job skills. Samson proudly points to them and says, “I get to hire those guys today!”

Even though the average length of time for a client to complete all treatment phases and graduate is five to nine months, Samson was committed to continuing treatment after graduating. After years of graciously serving, Samson credits people like Dr. Austin Jerani, Director of Behavioral Health Services, and the late Brother Bill Omanski for grooming him and seeing his potential.

Twelve years later, the Samson that entered Camillus House is not the same man who now is a dedicated team member.

As Samson sees it, “The way my mom was is how I am living my life now. Caring for people and being the best person I can be. I am finally living that!”

It has taken a long time, but Samson has come to terms with his addiction and the painful destruction it caused.

“I had to go down an ugly path to be the man that my mom always wanted me to be,” Samson admits. Optimistic and motivated, Samson is excited about the little things… “Waking up and being a productive person overall,” he says.

He’s now focused on pursuing a Master Degree in mental health so that he can do more for the people served by Camillus House.